There are two main types of dried kelp used in Korean cooking, ‘dashima’ – the flat dried sheets (marked ‘a’ in the photo on and more commonly known by its Japanese name ‘dashi kombu), and ‘mee yeok’ – the rougher more stringy variety (marked ‘b’ in the same photo), also more commonly known by its Japanese name “wakame’. The former is used to make soup stocks and as a flavour enhancer for all kinds of stews and broths. However, it is not eaten and is always removed before serving. ‘Mee yeok’ on the other hand is eaten, and is used in the very popular ‘seaweed and beef soup’. 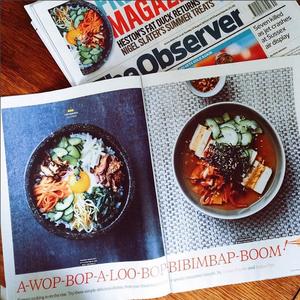 For news and upcoming events please visit us at www.jordanbourke.com and join our mailing lists for recipes, news and updates on supper clubs and events.